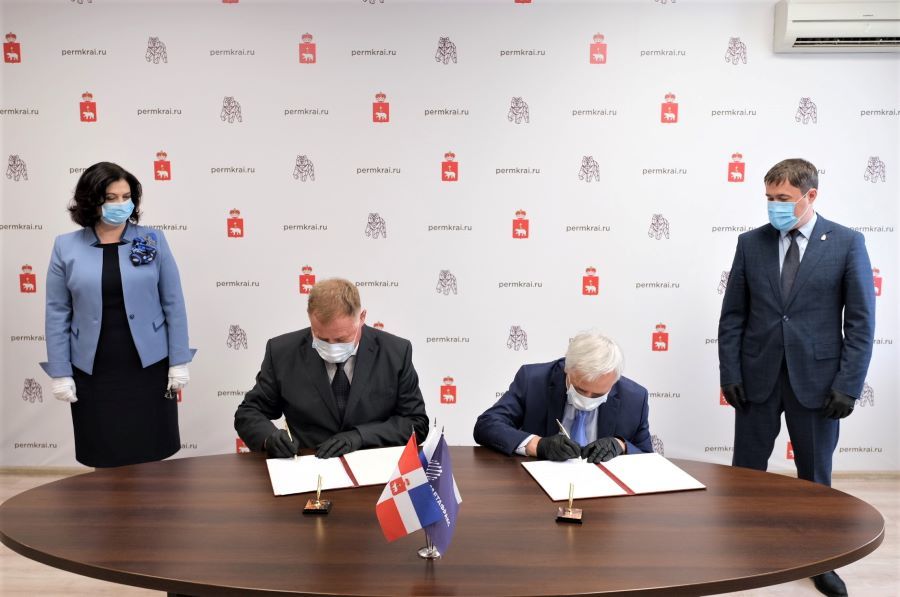 PJSC Metafrax and Altex-Stroy LLC have concluded a memorandum of understanding in relation to the general contractor contract signing for construction of the paraformaldehyde and formaldehyde production plants. The document was signed by general director of Metafrax Vladimir Daut and general director of Altex Stroy Sergey Sedov. Memorandum signing ceremony was held on 29th July 2020 on the facility of the Perm region administration in presence of the region head Dmitry Makhonin, vice president of the RF Commerce and Industry Chamber Elena Dybova and PJSC Metafrax board of directors chairman Armen Garslyan.

The document confirms the readiness of Metafrax to invest more than 5 billion rubles (without VAT) in the investment project execution for creation of the paraformaldehyde (30 thousand tons per year) and formaldehyde (180 thousand tons per year) production on the production facility in Gubakha. The company Altex-Stroy confirms intention to sign in 2020 a contract of the construction contractor for the plants construction.

“Deeper methanol processing and output of the products, which previously were not produced in Russia, are foreseen by Metafrax development strategy till 2030. After commissioning of the new plant we will receive paraformaldehyde and become its only producer throughout the post Soviet Union area. We already have understanding, what the portfolio will be. I believe that thanks to our project the consumption amount for this product will increase in Russia”, clarified Armen Garslyan.

“For our enterprise this is the second most important project after construction of Ammonia-Urea-Melamine (AUM) complex in terms of the investment amounts during the last years. We are going not just provide the Russian enterprises with paraformaldehyde. More than half of the product we are going to export”, informed Vladimir Daut.

“Altex-Stroy already for two years has been working on the AUM construction site. The new project is quite clear for us. We do not see any fundamental difficulties in construction and start-up of the plants in time”, stated Sergey Sedov.

“Just recently we met on the construction of the large-scale project, which is implemented by Metafrax: AUM Complex in Gubakha. Despite the global problems of today on the global markets, the investment activity of the company does not weaken. The paraformaldehyde plant construction project is aimed to import substitution. It means that the Russian enterprises will be less dependent on the import products. In Gubakha there will be more than 30 new well paid and highly-skilled work places. The social program of the company creates in Gubakha the stability center. When there are a lot of such “centers”, quality of life in region is substantially better”, highlighted Dmitry Makhonin.

“At this difficult time we very often visit the regions and we see that the major part of the business points to the problems, difficulties. That is why implementation of such projects, and this is quite serious investments, is an indicator that Perm region and its administration purposefully support entrepreneurs, offer help to the business, create the conditions when the technologies, moneys are coming, work places are being created, not closed”, noted Elena Dybova.

In June 2019 a special investment contract (SPIC) was signed on the project execution. Within the program “Development projects” an agreement was signed with the Industry development Fund regarding provision of a loan in amount of 500 million rubles. Project implementation was started by Metafrax in 2019. Putting the facility in operation is planned for the end of 2021.