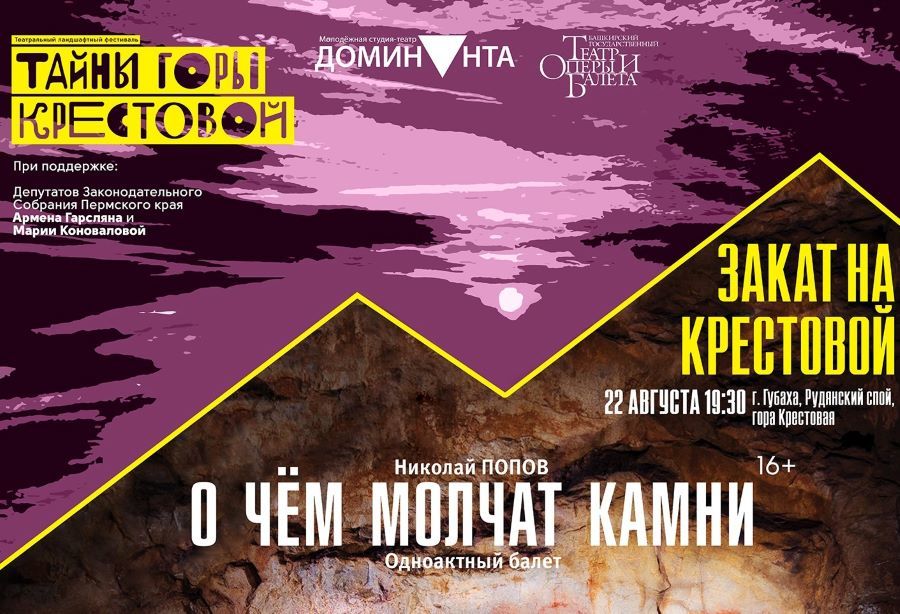 IX theater landscape festival “Mysteries of the Krestovaya mountain” will take place on 22 August in Gubakha following all sanitary and epidemiological rules. This year within the project “The sunset on the Krestovaya mountain” Bashkir state theater of opera and ballet will present the single act ballet “What the stones keep silence about”. The start of the event is at 7:30 p.m.

“This year the festival organization on the Krestovaya mountain became possible after preparatory works by the regional Ministry of Culture with the Administration of the Perm region Rospotrebnadzor”, informed the deputy of the Legislative Assembly in Perm region Armen Garslyan. “Earlier relevant instruction within the Emergency center was given by the region head Dmitry Makhonin. As a result, were taken necessary safety actions, opening program will be visited by no more than 1000 persons”.

For convenience and safety of all the participants of the event there are two ways up being organized: automobile and pedestrian, which can be used only by the holders of the tickets, invitations and passes. The tickets can be purchased on the site of the Youth theater Dominanta: teatrd.ru.

All the check points will be ensured with the contactless temperature indicators, sanitizers, as well as personal protective equipment (masks, gloves) for each viewer. To follow social distance the territory of Rudyandsky Spoy will be marked with the meter and half circles, inside of which individually or with the small groups (coming together) the festival visitors can be placed.

The ballet “What the stones keep silence about” will bring the audience in fascinating in their beauty and nature Bashkortastan landscapes. Exactly here, near the cave of Shulgan-Tash were born the unique records of the Bashkir folk art: the legend “Akbuzat” and the epos “Ural Batur”.

“With the repertoire of Bashkir theater of opera and ballet we got familiar 2 years ago during their visit to Perm. We were impressed and we got an idea to invite them to festival “The mysteries of the Krestovaya mountain”, comments Maria Konovalova. “What the stones keep silence about” is a single act authentic ballet, the very name of which is consonant with the Krestovaya Mountain”.

For those who cannot visit the event of the landscape festival Vetta television company will film and broadcast the event. In such a way “The sunset on the Krestovaya mountain” will be possible to virtually visit by all who wants, not only from Perm region, but from other regions as well.