For expansion of production capacities took place the public hearings 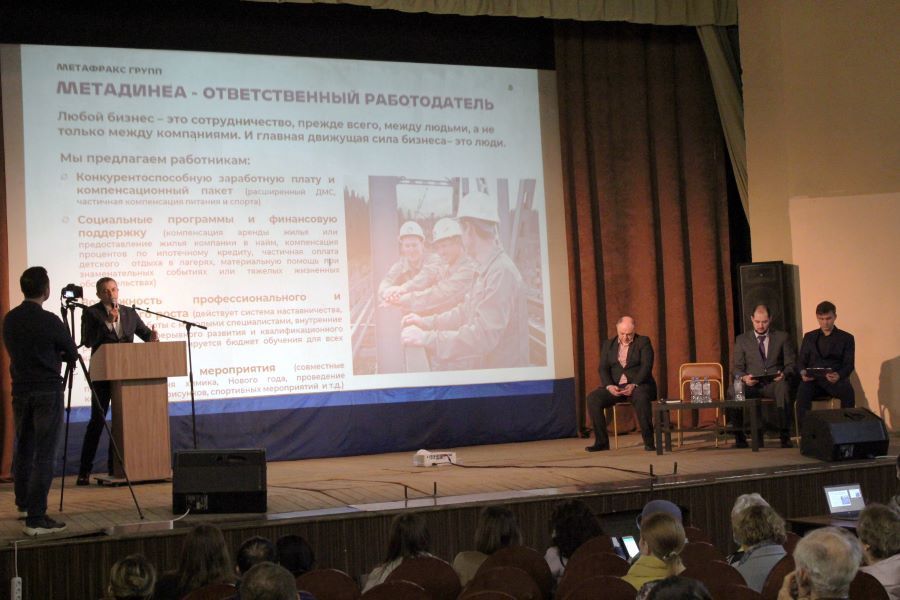 On 25th March were carried out the public hearings for the facility of the state ecological expertise — project documentation of “Formalin-3 production plant”, which contains preliminary documents for estimation of the environment impact. Additional capacities of formalin production at Metadynea LLC site in Orekhovo-Zuevo will allow to increase the resins production.

In the project hearings participated around 100 people, including representatives of administration, Metadynea top management, representatives of the project documentation preparation and works on estimation of environment impact company, Engineering and Technological Center Metafrax LLC, as well as representatives of community from Orekhovo-Zuevo urban district. Public hearings were carried out on 25th March in “Malodubenskiy dom cultury”.

The hearings were started by the Deputy Chairman of the Commission, Head of the Housing and Utilities Department of the Administration of the Orekhovo-Zuevsky District Roman Apatenko, who introduced for everybody the event procedure and called on LLC Metadynea general director Igor Spasskiy and Roman Bayazitov, deputy general director – engineering director of Engineering and Technological Center Metafrax LCC.

Igor Spasskiy told to the hearings participants about current work of LLC Metadynea and perspectives of its development. The company general director noted that the production facilities development, as before, will be connected to the strict following of the company endorsed policy of environmental safety, environment protection and rational usage of natural resources in relation to labor protection and industrial safety. Apart from that, Metadynea valid policy was shown in the report about social programs for employees protection and charity.

Roman Bayazitov, who spoked next, provided the main information about the project “Formalin–3 production plant”. As per the speech of the engineering director of the ETC Metafrax, the design capacity of the plant will be 91 thsd. tons of concentrated low methanol formalin per year.

During the hearings the questions were also asked about the project ecological safety. According to the chief specialist of the ETC Metafrax process section Ilya Ershov, gas treatment equipment foreseen by design ensures effective catalytic treatment of the atmosphere exhausts. Based on results of the calculations for diffusion, it was stated that under normal operating conditions the extra emissions of the impurities from the new plant will not have substantial negative impact on the level of the atmosphere pollution. In addition to that, HSE department head of Metadynea LLC Denis Gerasimov noted successful completion by the company of the checks for following valid regulations and rules on ensuring safety for personnel, enterprise production process, as well as big company experience in deployment of advance technologies, which decrease negative environmental impact and ensure ecological safety.

During the dialog with audience the management and specialists of Metadynea, ETC Metafrax in detail replied to all the questions of the hearings participants. As a result, the citizens who attended the hearings were able to in detail get to know the project.

Concentrated low methanol formalin is a water formaldehyde solution, which is a raw material for production of phenolformaldehyde, melamineformaldehyde and ureaformaldehyde resins and products of organic synthesis.