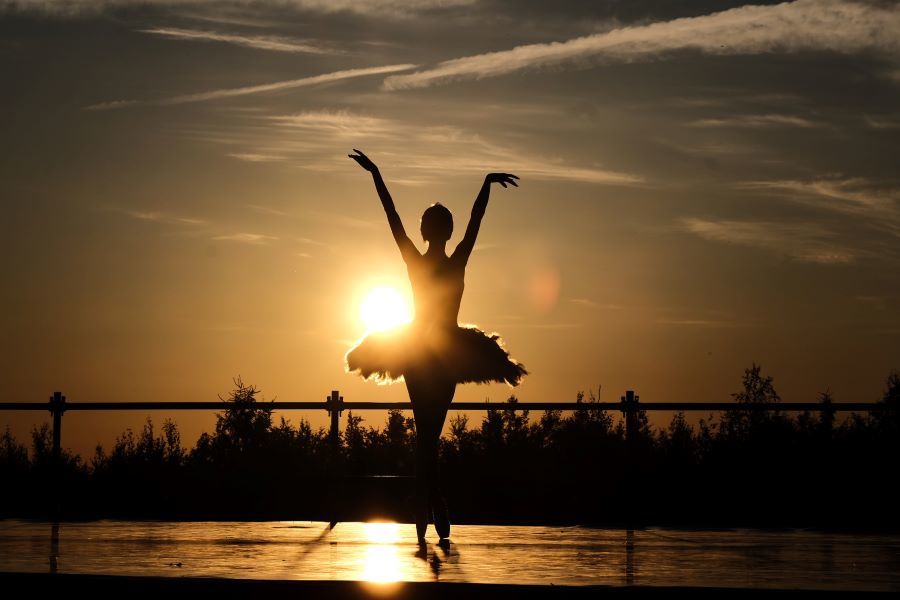 On June 26, the opening of the tenth theatrical landscape festival "Secrets of Mount Krestovaya" took place in Gubakha. This year, the Perm Opera and Ballet Theater participated in the project with ballets: "Polish Ball", "Polovtsian Dances", "The Spirit of the Rose" and "The Dying Swan". About 200 thousand people became spectators of the online broadcast of the festival on the "Vetta 24" TC.

The sunset on Krestovaya was special this year. The colors of the sky, sometimes tender, sometimes bright, fascinated the audience and filled the classical ballet plots with new emotions. According to the audience, both sections of the opening of the festival seemed to fly before their eyes. The natural landscape, music and classical ballet have become one exciting image.

"It is important for artists to change their location and demonstrate their skills not only at their native stage in the theater – says Anton Pimonov, head of the ballet troupe of the Perm Opera and Ballet Theater. – Such performances boost our self-confidence, help us feel that our work is in demand".

According to Armen Garslyan, deputy of the Legislative Assembly of the Perm region and chairman of the Board of Directors of "Metafrax", the "Secrets of Mount Krestovaya" festival is of great importance for the development of Gubakha.

"Gubakha is a powerful, strong and developing city, - says Armen Garslyan. – And over time, it will become even more beautiful. We aspire to become the third city in the Kama region after Perm and Berezniki. We will do our best to get this status. I remember when the festival was held for the first time, we did not even imagine how it was possible to take the theater to the mountain. And now we are celebrating the anniversary! I believe that everything will work out for us. I thank Dmitry Makhonin, the Governor of the Kama Region, and the Ministry of Culture of the Perm Region for their support in the development of our project".

"This year there is a truly significant event for everyone involved in the theater festival – we are celebrating 10 years of creative search, annual excitement, pleasant fatigue after completing all the events and understanding that we are moving in the right direction. This is confirmed to us every year by the audience, who have always been with us, even in the last two years, despite the difficult conditions in which we found ourselves due to the spread of the coronavirus, - said Maria Konovalova, chairman of the organizing committee of the "Secrets of Mount Krestovaya" festival. – All these ten years we have been looking for the forms that we can offer to our audience - these are vocals, instrumental music and ballet. And we are glad that we always get a response from the viewer".

Due to the requirements of the operational office for the prevention of coronavirus in the Perm Region, the number of festival guests was limited to 1000 people. All the spectators of the festival provided the results of PCR tests and/or vaccination certificates at the entrance. The checkpoints were be equipped with non-contact thermometers, sanitizers and personal protective equipment (masks, gloves). The organizers provided all the festival guests with the opportunity to maintain a social distance in the audience area.

The next event of the festival will be held at the same place, at Mount Krestovaya, on July 3. The "Ballet of Yevgeny Panfilov" Theater will show its Tolstoy performance based on six works by Leo Tolstoy.

"The main program of the festival will be held in Gubakha from July 3 to July 8, 2021 and it will be presented by the most powerful productions of bright theater groups of our country: the "Ballet of Yevgeny Panfilov" theater (Perm), the "Chekhov Studio" theater (Melikhovo), the Workshop of Tanya Strelbitskaya. And of course, we will present the landscape premiere of the director Radion Bukaev", - notes Lyubov Zaitseva, the director of the festival.

In 2021, the "Secrets of Mount Krestovaya" festival is held with the support of the State Autonomous Institution of the Perm Region "Tourism Development Center".

"Secrets of Mount Krestovaya" is a theatrical landscape festival that has been held in Gubakha on Mount Krestovaya at the top of the Rudyansky Spoy ridge since 2012. The following establishments have performed at the Mount Krestovaya: the Perm academic opera and ballet theater named after P. I. Tchaikovsky, the Moscow theater of Alexei Rybnikov, the "Ballet of Yevgeny Panfilov" theater , the Perm Academic Theater-Theater. Over the past years, more than 80 000 people have become spectators of the festival and the online audience has exceeded 270 000 people.