AUM - in the spotlight 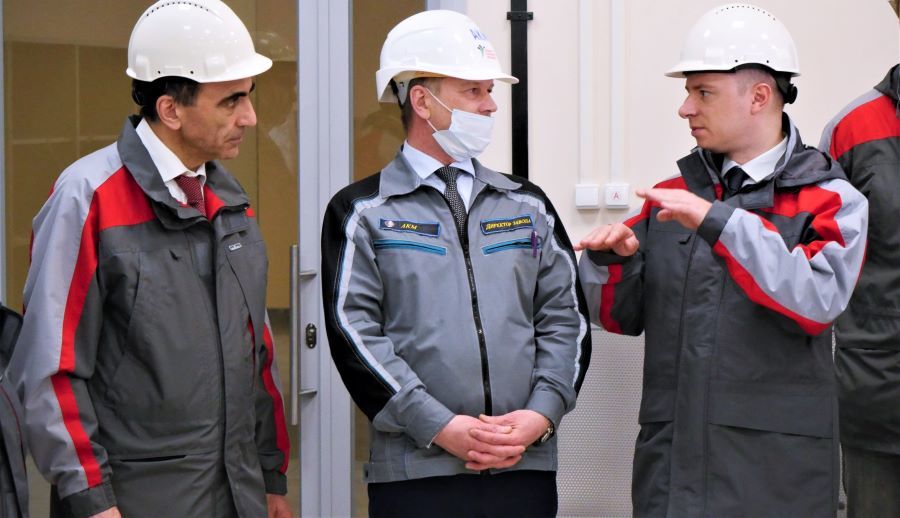 Mikhail Ivanov, Deputy Minister of Industry and Trade of the Russian Federation, got acquainted with the implementation of the largest regional investment project.

Mikhail Ivanov, Deputy Minister of Industry and Trade of the Russian Federation, took a work trip to the "Metafrax Chemicals" enterprise in the city of Gubakha, Perm Region. Accompanied by Armen Garslyan, chairman of the Board of Directors of "Metafrax" PJSC, the head visited the production of methanol, the construction site of the "Ammonia-urea-melamine" complex and the corporate museum of the company. During the visit, a discussion was held regarding the prospects of company's cooperation with industrial enterprises of the Perm Region and other regions of the country, the possibility of imports' phase-out for equipment elements in production as well as training and engagement of qualified workers. The key issue was the completion of the construction of the AUM complex.

According to the company's top manager, all measures are being taken to complete the construction of the new complex by the end of 2021 and start the full launch of new production facilities.

- After the completion of construction and installation works, equipment is already being commissioned at a number of facilities and the scope of this activity increases monthly. There is every chance for a successful completion of the project. We are ready to engage new resources for this purpose, if necessary, - Armen Garslyan said.

The Deputy Head of the Ministry of Industry and Trade noted that "Metafrax" is now known as the largest producer of methanol and resins in Russia and Europe that diversifies its product line and actively participates in the implementation of the national project "International cooperation and export".

- Today we paid special attention to the inspection of the site of new "Ammonia-urea-melamine" project. Around 60 billion rubles will be invested in it and up to 400 new jobs will be created. The AUM complex is a big acquisition for "Metafrax" itself as well as for the city of Gubakha and the Perm Region as a whole. We foresee that the project will be successfully implemented, - stated Mikhail Ivanov.

The design capacity of the AUM Complex will allow to annually produce up to 517 thousand tons of urea, 298 thousand tons of ammonia and 40 thousand tons of melamine. Due to the implementation of this project, "Metafrax Group" plans to increase the production of synthetic resins by 200 thousand tons. In this regard, the task of expanding cooperation with industrial enterprises becomes even more relevant.

In order to resolve this task, an action plan for the interaction of "Metafrax" with the industrial complex of the Perm Region was signed at the site of the VI Perm Engineering and Industrial Forum on April 15. The document was approved by Dmitry Makhonin, the Governor of the Perm Region, and Vladimir Daut, the General Director of "Metafrax" PJSC. The document is aimed at expanding collaboration in terms of industrial cooperation, non-resource exports and the exchange of best practices in the field of management and ecology.

- We see new opportunities for our enterprises – both in imports' phase-out and in the implementation of our plans for the industry development as a whole. We do all this to look into the future more confidently: these are prospects for creating new developments, production facilities and jobs. And an increase in the tax basis, which will help us fulfill our social obligations to the residents of the region, - noted Dmitry Makhonin.