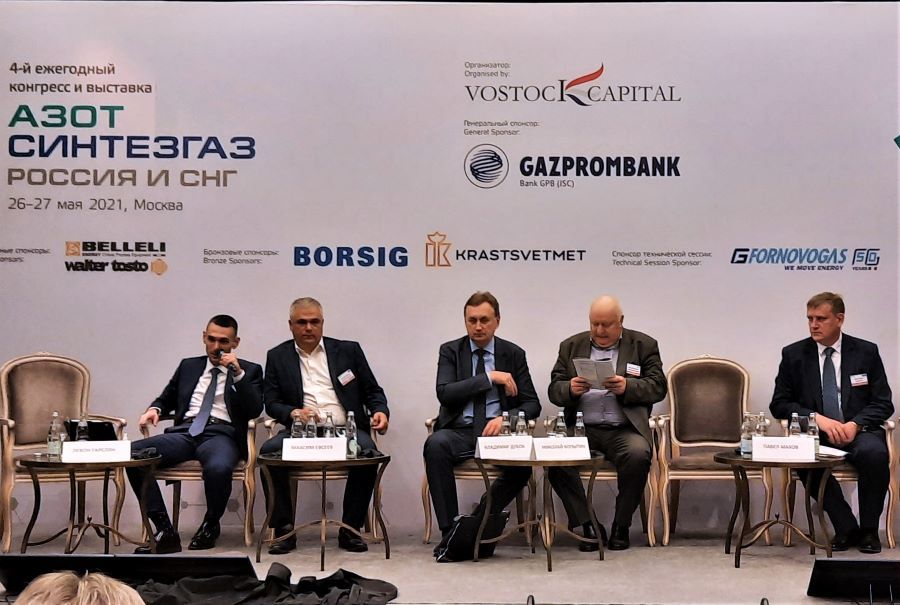 Levon Garslyan, Deputy General Director for Strategic Development and Evaluation of Investment Projects at "Metadynea" LLC, took part in the 4th Annual "Nitrogen Syngas Russia and CIS" Congress. Topical issues regarding development of syngas processing areas are discussed at this professional closed platform. The discussion, which took place in Moscow on May 26-27, was attended by more than 250 representatives of the largest manufacturers of methanol, ammonia, nitrogen fertilizers from Russia and the CIS countries, regulatory authorities as well as suppliers of technologies and equipment.

Within the framework of the round-table discussion "Methanol and derivatives: strategies and solutions for the development of the methanol industry", where the top manager of "Metadynea" acted as a moderator, a number of cases for the launch of new production facilities and modernization of existing ones were reviewed in detail. The discussion was attended by representatives of "Gazprom Methanol", "LUKOIL-West Siberia", "Ammonium", the "Titan" Group of Companies and others. At the "New Sources of Financing for the Gas Chemical Industry – How to Attract and Justify investments" session, Levon Garslyan presented a report on the company's project search system for medium - and low-tonnage chemicals.

The Deputy General Director of "Metadynea" LLC highly rated the results of the congress.

- I consider participation in this discussion to be definitely useful. Participants from various industries – manufacturers, consumers and technology owners - were represented here. As a result, we got a comprehensive view of where the industry is going, which will certainly help in our work, - stated Levon Garslyan.

In total, more than 20 new and current investment projects were presented at the congress. A discussion of current technologies and prospects for the production of hydrogen from syngas in Russia and the CIS is among the novelties in the event's program.