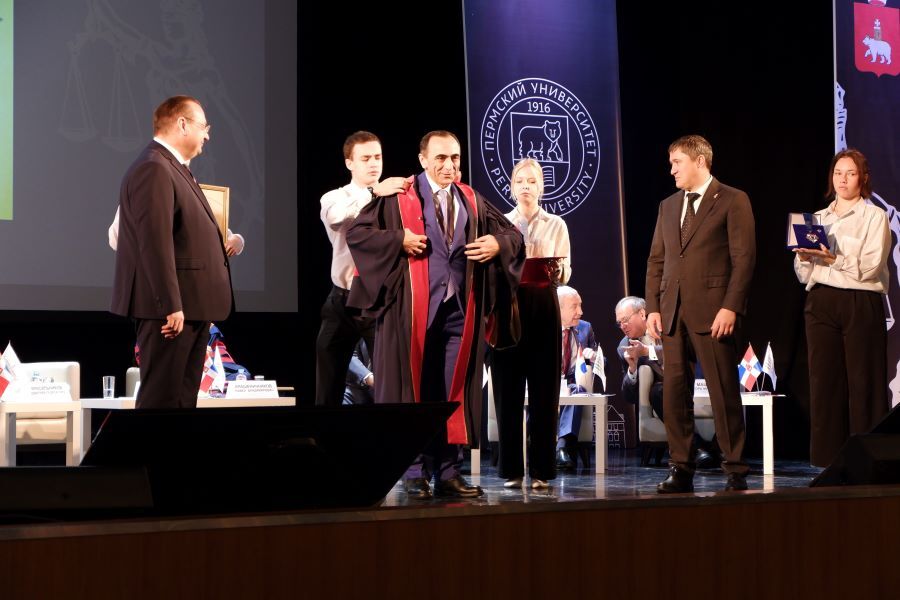 Armen Garslyan, the Chairman of the Board of Directors of "Metafrax Chemicals" received the title of Honorary Professor of Perm State National Research University. The grand ceremony of title conferment took place on October 28th at the plenary session of the XII Perm Congress of legal scholars at PSNRU.

Armen Garslyan received his first higher education at Perm State University: in 1995 he graduated from the Faculty of Law. Armen Gayosovich has been a benefactor of Perm State National Research University for more than 20 years, is a member of the University's Board of Trustees — a body that establishes connections between the university, the business community and government authorities.

The Academic Council of PSNRU confers the title of honorary professor to public figures and politicians, who have made a significant contribution to the development of the university.

- I am proud to be a graduate of Perm State University. I have many fond memories associated with the time of my student life. It is important for me today that my Teacher, Viktor Mikhailovich Tsodikovich, is in the hall, - stated Armen Garslyan, - It is a great honour and great responsibility to join the ranks of honorary professors of PSNRU: these are outstanding, successful people, who have done a lot for the development of not only the university, but also our region and Russia as a whole. I am grateful to the Academic Council for this decision. I am glad that our connection with the university has not been severed, but on the contrary, it is strengthening every year. Due to our joint work, among other things, the university is successfully developing. We have big plans and our task is to put them into practice.

"Metafrax Group" and PSNRU systematically cooperate in the educational, scientific and innovative as well as information areas. Three faculties are involved in the work: chemical, economic, and law. Employees of "Metafrax" analyse the university’s curriculum from the point of view of application, give lectures to the students, conduct master classes and excursions to the enterprises of "Metafrax Group", form research teams and laboratories. Other important areas of joint work are attracting investments to R&D of university industry developments and conducting research for the group's companies on the basis of the university.