Investment projects of Metafrax Group are presented at GPTC 2021 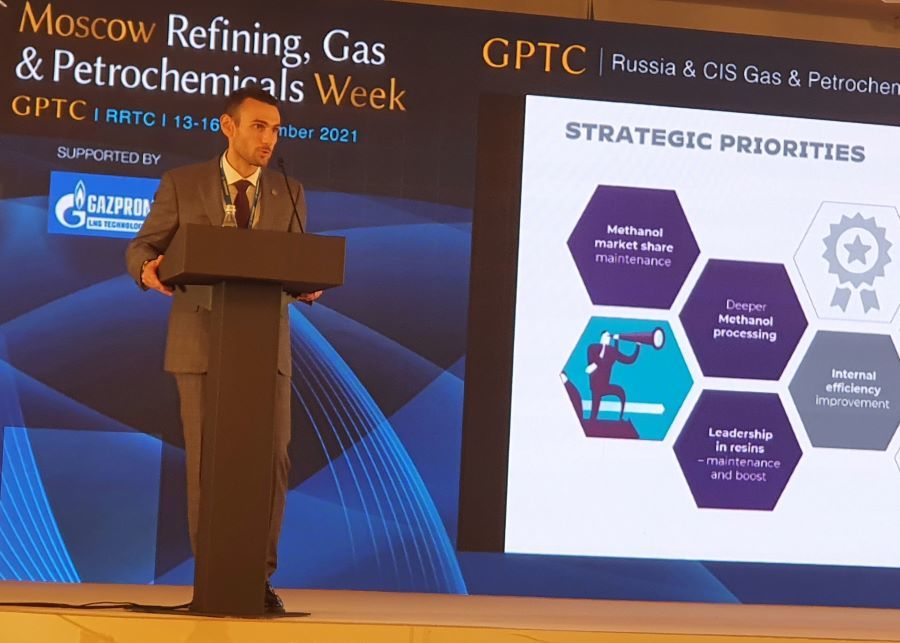 Levon Garslyan, Deputy General Director for Strategy and Investment Assessment of LLC Metadynea, presented the Ammonia-Urea-Melamine (AUM) project and the transition strategy to deep processing of raw materials at the GPTC 2021 technology conference and exhibition of petrochemicals and gas chemistry.

The agenda of the conference included the discussion of economic and environmental problems of oil and gas monetization in Russia and CIS countries, digital transformation of production and innovative approaches to enterprise management. The delegation from Metafrax Group was represented by Levon Garslyan and Deputy General Director for Production of LLC Metadynea Vyacheslav Zhdanov.

During the presentation part of the session “Ammonia, methanol and their derivatives”, Levon Garslyan focused on the largest investment project of Metafrax Group: AUM, which stands out for its high degree of environmental friendliness.

“CO2 will be recovered from the collection of flue gases from existing primary reformers in the methanol production, which is necessary for the further urea production. As a result, carbon dioxide emissions in the atmosphere will decrease more than twice”, explained Levon Garslyan.

At the presentation, the strategy of Metadynea and Metafrax Group was presented, aimed at promoting methanol, developing special low-tonnage chemistry and the possibility for capacity expanding of existing melamine production.

In the discussion part of the section, representatives of Metafrax Group participated in an expert discussion of market prospects and changes in demand for methanol, ammonia and urea.

“Today there is a high demand and level of prices for methanol, which has been going on for quite a long time. The question was when this supercycle will end, how strong the fall will be and when the rebound will occur”, says Levon Garslyan. “So far we have come to the conclusion that it is difficult to predict the course of events with accuracy. Various options are possible, but in general, the fall is expected to be greater. Although a slight increase in the fourth quarter is not excluded”.

LLC Metadynea is the Russian market leader in the production of synthetic resins for a wide range of applications. The company is a part of Metafrax Group. In Russia it is based on two production sites: in Gubakha, Perm Territory, and in Orekhovo-Zuevo, Moscow Region. The assets of the company also include a research and development center in Krems, Austria.

In the markets of the Asia-Pacific region Metafrax Group is also represented by its joint trading company Samyang Meta located in South Korea.