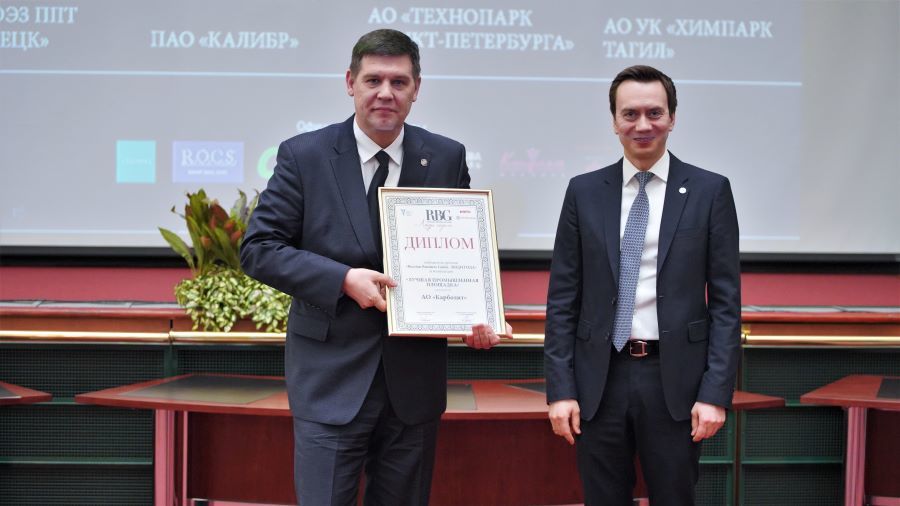 The "Karbolit" industrial park has received an award of the international magazine "Russian Business Guide" and the Chamber of Commerce and Industry of Russia.

The conference centre of the Chamber of Commerce and Industry of Russia (CCI of the Russian Federation) hosted the grand presentation of the III award "Russian Business Guide. People of the Year". One of the winners in the "Best Industrial site" category was "Karbolit" JSC. Denis Zhuravsky, the Executive Director of the Association of Industrial Parks of Russia, presented a commemorative statuette and a diploma to Maxim Batuev, the General Director of the company.

Maxim Fateev, the Vice-President of CCI of the Russian Federation, who participated in the ceremony, noted that last year was particularly difficult, but in general, the business managed to cope with its challenges. According to the organizers, the award shows that, despite the pandemic and crisis phenomena, the business is developing as well as finding new directions and ways to survive even in difficult situations.

"Karbolit" JSC is an industrial park of the brownfield type and a part of the "Metafrax Group". It is located in the city of Orekhovo-Zuyevo (Moscow region). More than 60 residents work within its territory. The types of production include chemical, production of construction and finishing materials, repair of tire products, production of polymers, furniture, sanitary wares and other goods. According to the results of its work in 2020, "Karbolit" JSC entered the top 5 management companies of industrial parks and industrial technology parks according to the assessment of the Ministry of Investment, Industry and Science of the Moscow Region.