Festival in the heart of Gubakha 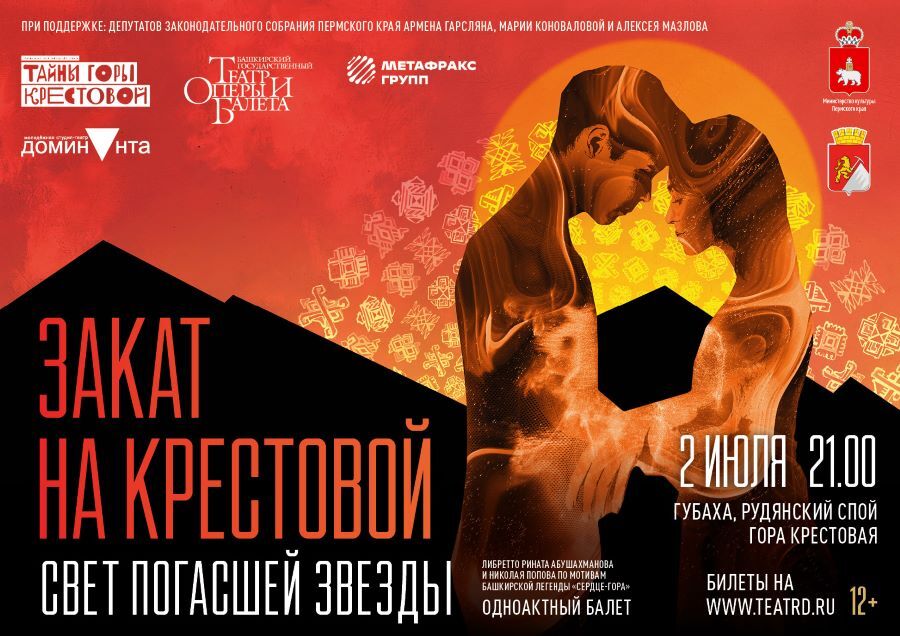 The 11th annual theater and landscape festival "Mysteries of Krestovaya Mountain" will take place from the 2nd to 8th of July, 2022, in Gubakha, Perm Region.

The event on Krestovaya mountain of the Rudyansky mountain range will be opened on July 2 by the Bashkir State Opera and Ballet Theatre. The audience will be presented with the one-act ballet “Light of an Defunct Star”. The organizers and partners of the festival told about this at a press conference in the conference hall of the Kommersant-Prikamye newspaper.

- Position is strong when it is stable. Therefore, despite any circumstances, we saved the festival, and this year the participants will also continue to create beauty, - said Mr. Armen Garslyan, member of the organizing committee of the festival, Chairman of the Board of Directors of Metafrax Chemicals PJSC. The Top Manager of Metafrax noted, that the «Mysteries of Krestovaya Mountain» festival finds the most active support from the regional authorities and highlighted that the tourism infrastructure in Gubakha is developing, among other things, thanks to such major cultural events.

- Our projects complement each other, strengthening the territory's motivation for development, – declared Mr. Armen Garslyan.

Deputy Minister of Cultural Affairs of the Perm Region, Mrs. Alla Platonova noted that this project is very important and personal for her. She took part in the preparation of the first performances on Krestovaya mountain.

- Nowadays we see not just a beautiful idea, which this project appeared for us 10 years ago, but we see the results of Gubakha's transformation. We notice how the town is changing, the hotel business is expanding, and the tourist flow is building up. The «Mysteries of Krestovaya Mountain» festival is an vivid example, how culture can be a driver for the growth of a territory and inspire people. This is a flagship event that attracts not only residents of the Perm Region, but also guests from other regions, - noted Mrs. Alla Platonova.

According to the opinion of the Chairman of the organizing committee of the festival, advisor to the Chairman of the Board of Directors of Metafrax, Mrs. Maria Konovalova, it is expected that significantly more people will visit the "Mysteries of Krestovaya Mountain" festival. In the previous two years pandemic restrictions were in place in the region, and a limited number of people could visit Krestovaya mountain. Now most of the restrictions have been lifted, and, according to the organizers, the event will be held in usual format.

- According to sociologists, the "Mysteries of Krestovaya mountain" festival is in the TOP-5 of the most famous and favorite projects for the residents of KUB (Kizel coal basin). This means that we are on the right way, and we are doing everything not in vain, - believes Mrs. Maria Konovalova.

According to the opinion of Mr. Yuri Kozhevnikov, Deputy Manager of the Fora-Bank JSCB’ branch in Perm, the annual festival in Gubakha is practically a "cult" for many people from all over the Perm Region. That is why the bank traditionally supports this cultural event.

- I am sure that in this year " Mysteries of Krestovaya mountain" will also be memorable and major event, - noted Mr. Yuri Kozhevnikov.

The festival director and artistic director of the Dominanta Theater Mrs. Lyubov Zaitseva spoke in detail about the festival program:

- The festival continues to expand cultural ties in the interregional theatrical space. The Bashkir State Opera and Ballet Theater will again become a participant in the sunset on Krestovaya project, which traditionally opens the festival. The spectators of the festival have already met with the artistic endeavour of the theater from Ufa. The project was opened in 2020 with the performance “What the Stones Are Silent About”. This year the theater troupe continues to acquaint us with Bashkir legends and will present the premiere of 2021 “The Light of an Defunct Star”.

The Chelyabinsk Modern Dance Theater with performances "Running" and "Oil", the M.A. Ulyanova Northern Drama Theater (Tara town) with the performance "Oedipus Rex" ale also invited to Gubakha. Youth theater "Dominanta" (Gubakha) will present the performance "KUB" dedicated to the miners. The Chekhov Studio Theater of the Melikhovo Museum-Reserve (Moscow Region) will show the performances “The Seagull” and “After Chekhov”. The performances will be presented in the picturesque locations of the Rudyansky mountain range, the Shirokovsky water reservoir, the village of Verkhnyaya Gubakha. The reconstructed park named after Yuri Gagarin will also become the stage. For the first time a site on the top of Krestovaya mountain will be involved in play.

«Mysteries of Krestovaja mountain» is the theater landscape festival, which has been held in Gubakha since 2012. The P. I. Tchaikovsky Perm Academic Opera and Ballet Theatre, the Alexei Rybnikov Moscow Theater, the theater "Ballet of Evgeny Panfilov", the Perm Academic Theatre-Theater, the Bashkir Opera and Ballet Theater showed their performances on Krestovaja mountain. Over the past years, about 80 thousand people have become spectators of the festival, the online audience has exceeded 270 thousand people. The partners of the event are Metafrax Chemicals PJSC and Fora-Bank JSCB.